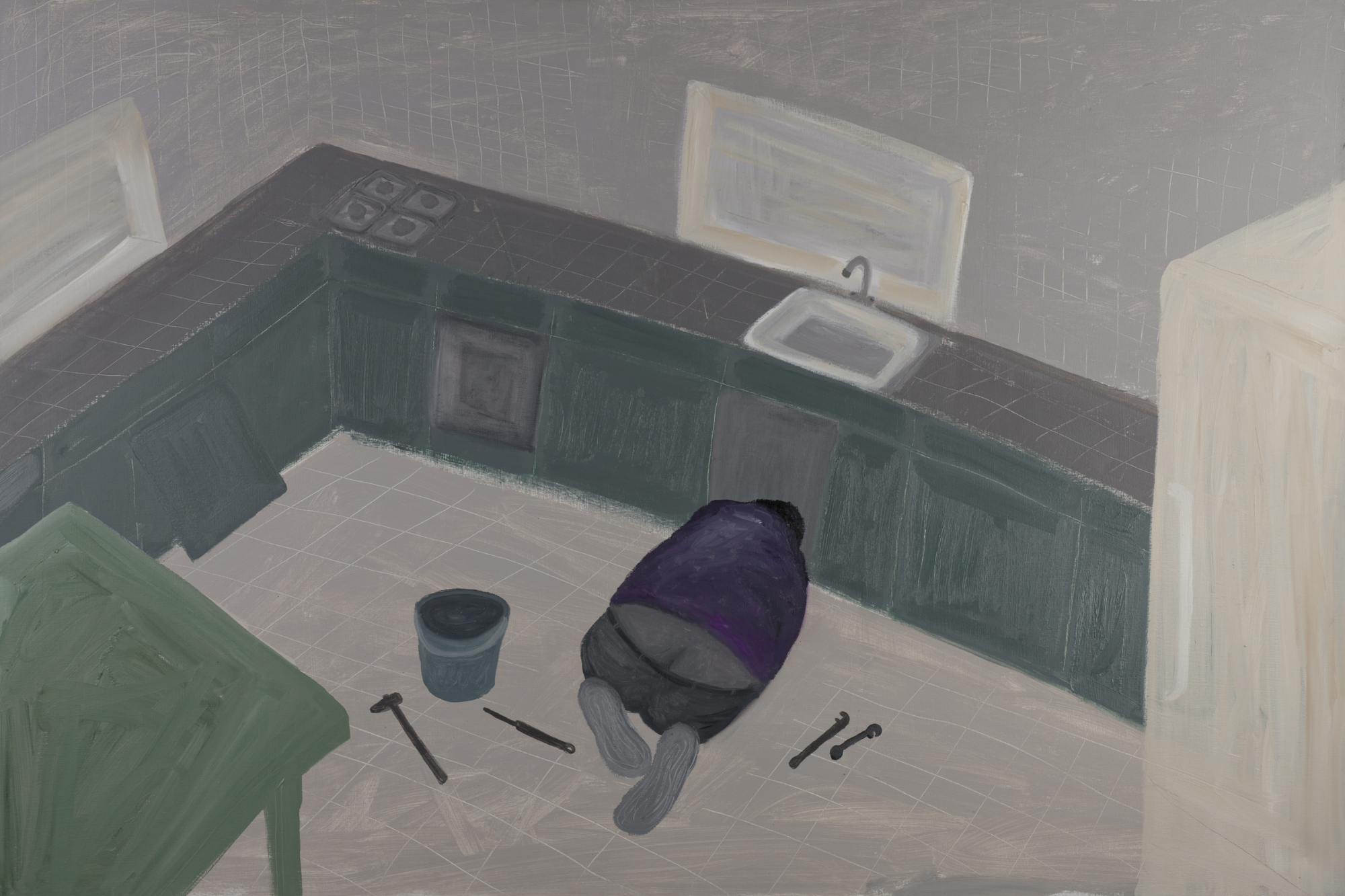 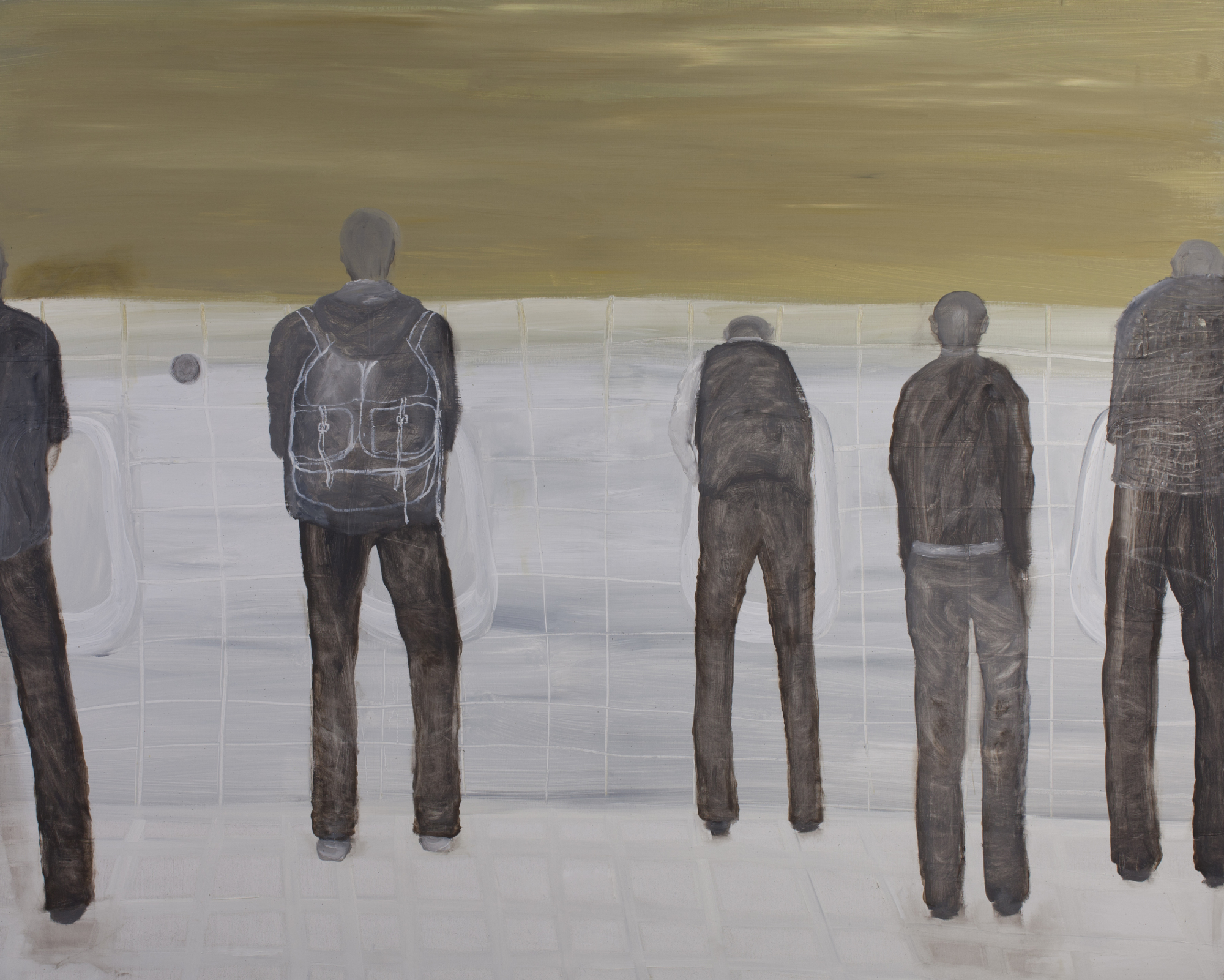 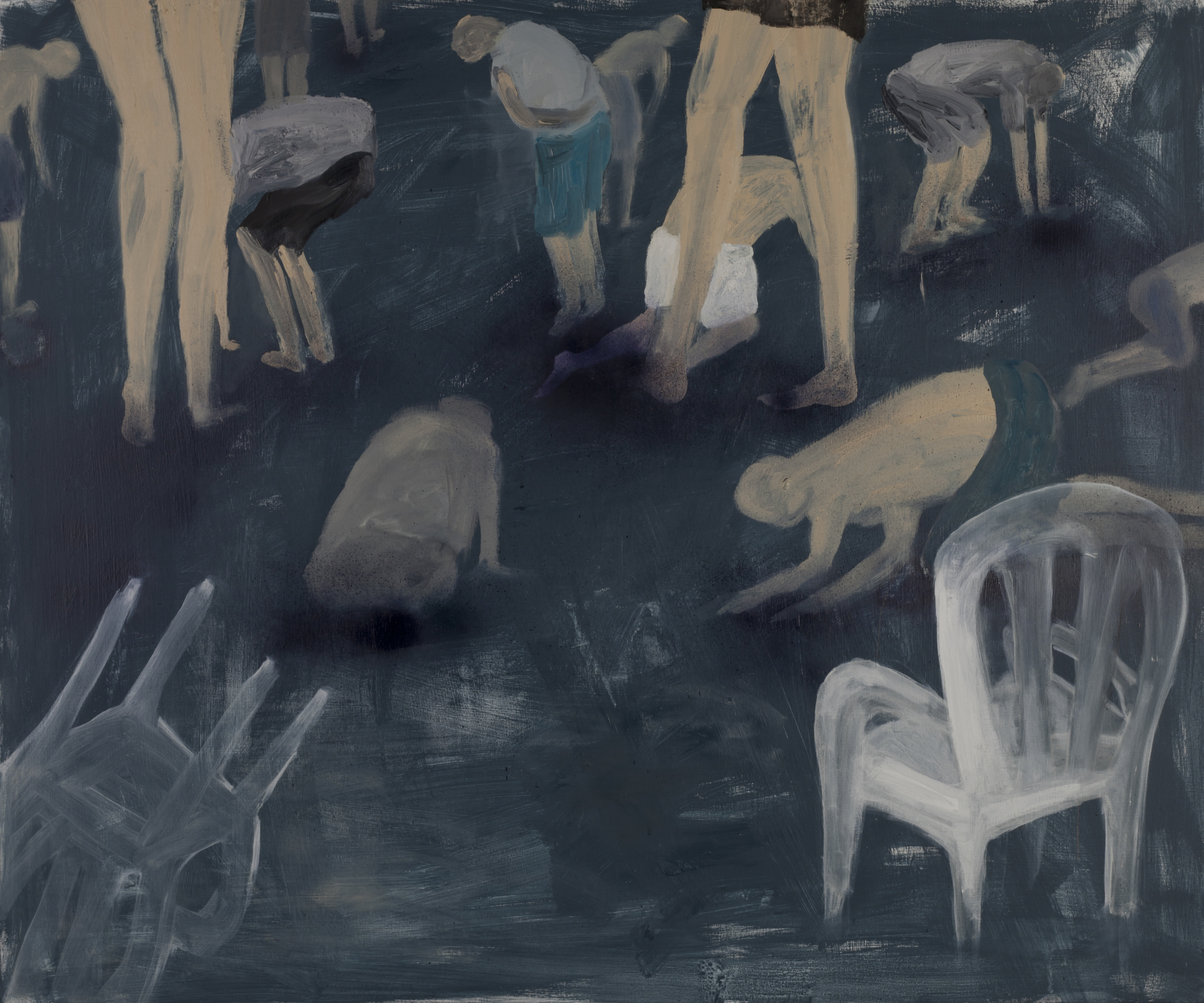 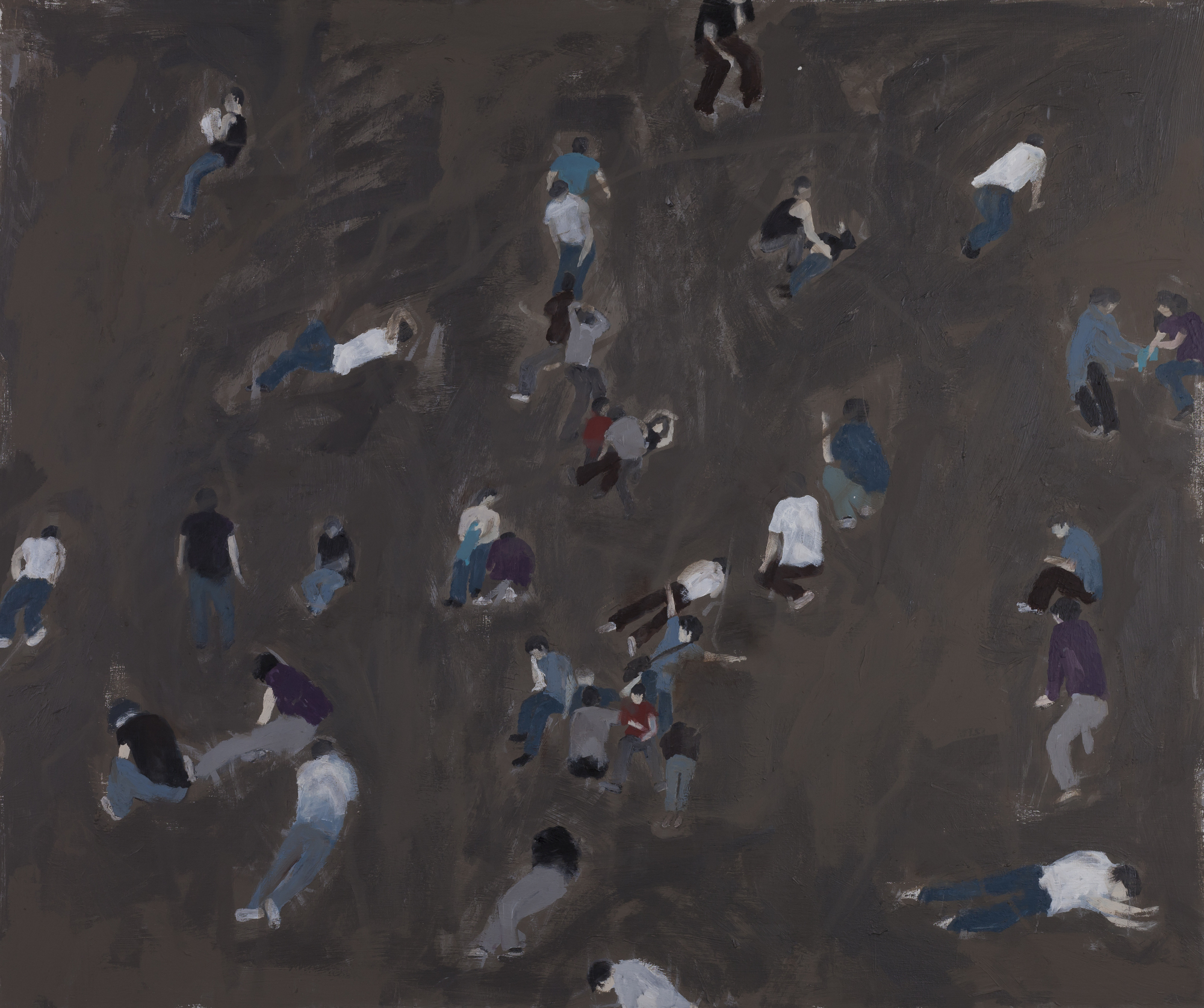 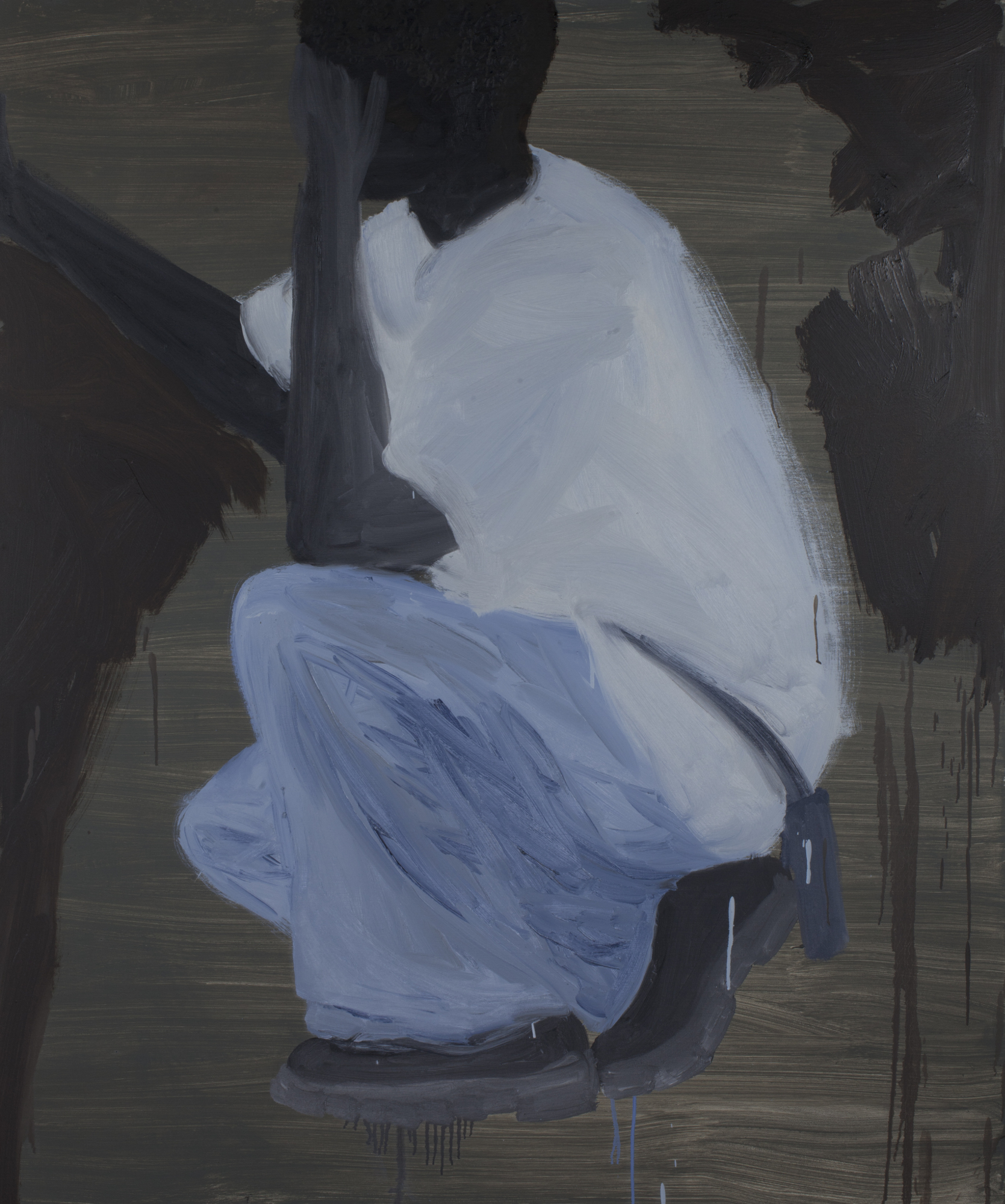 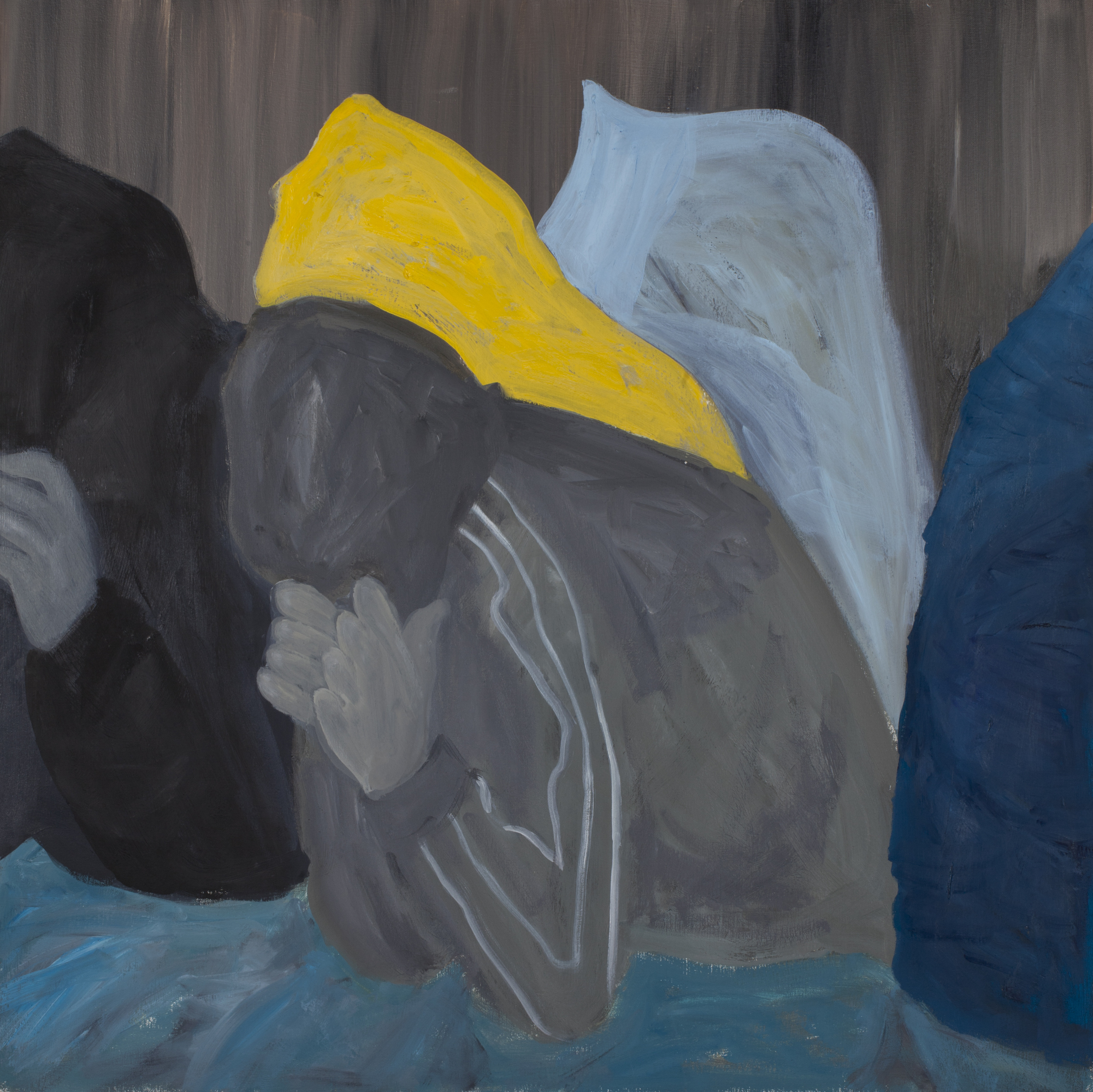 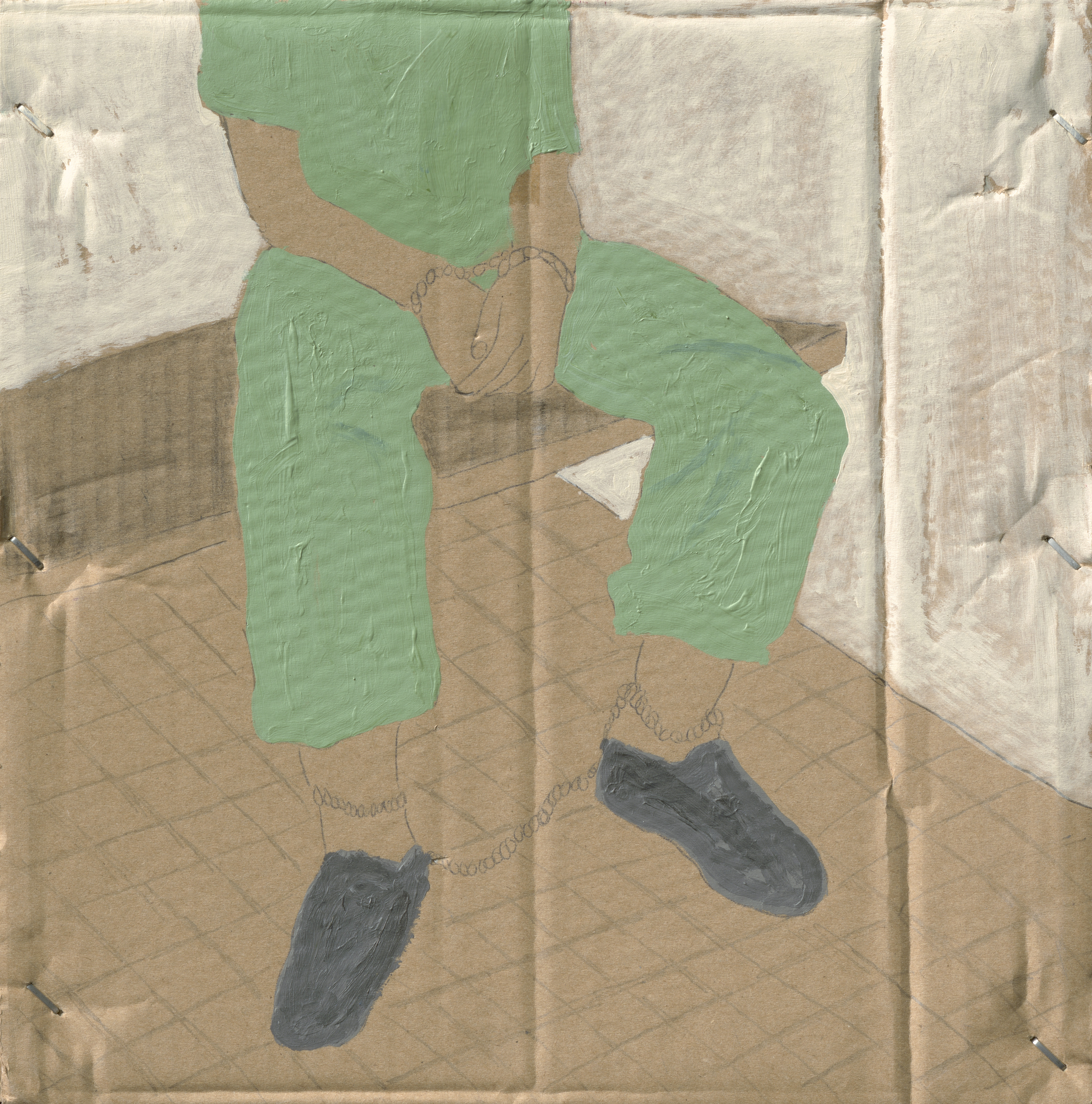 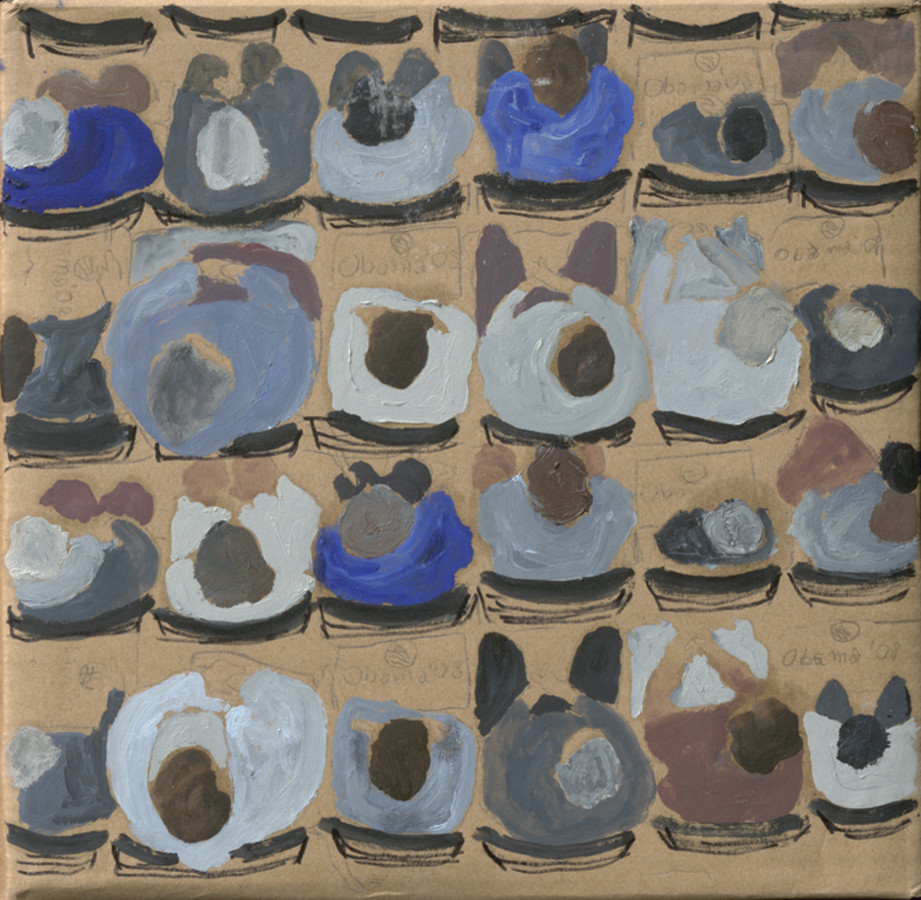 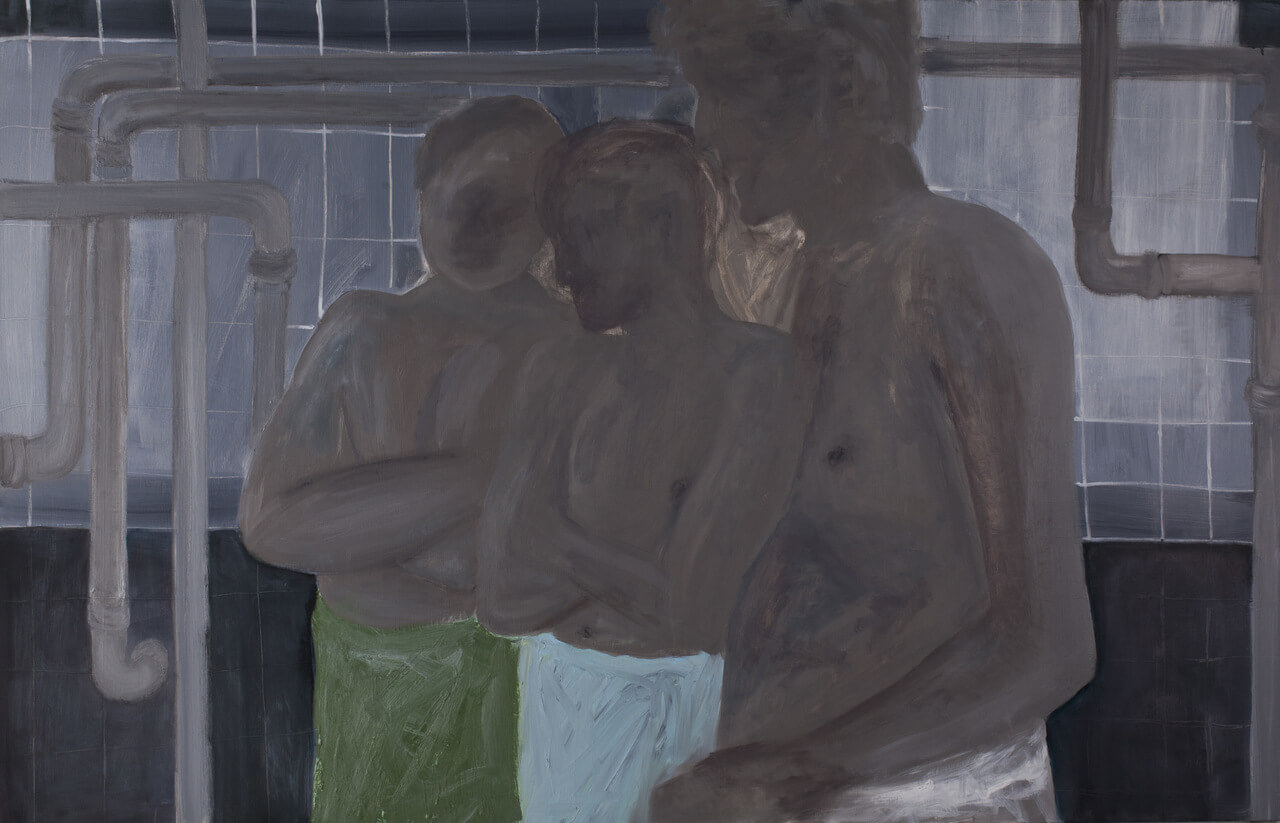 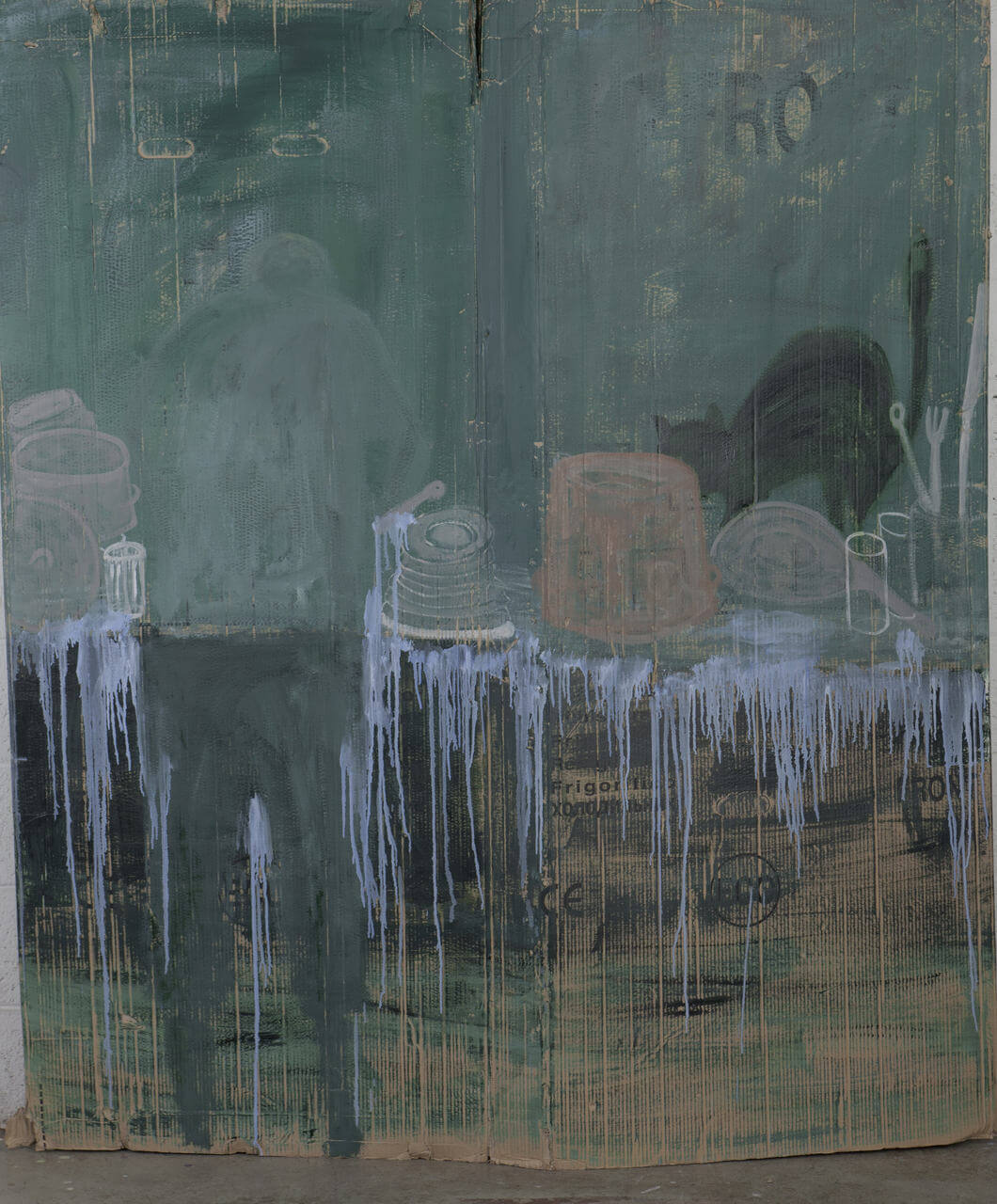 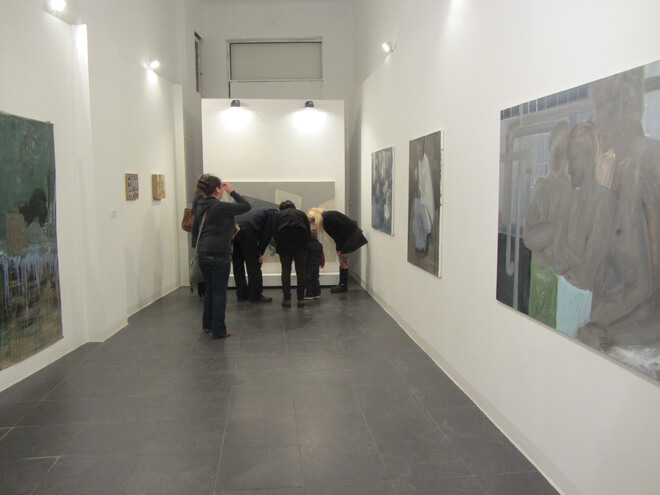 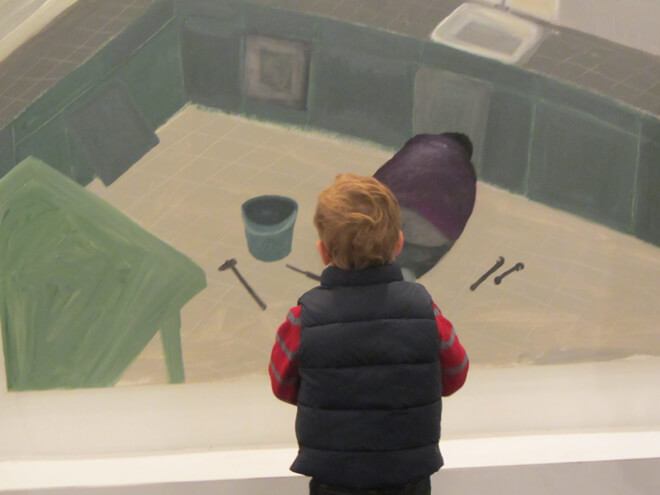 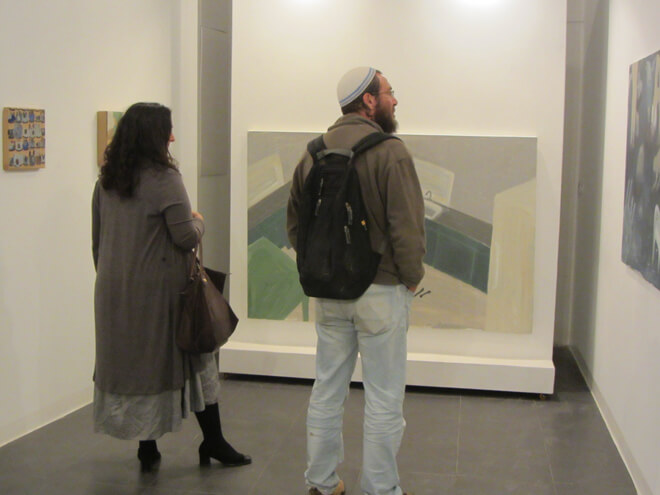 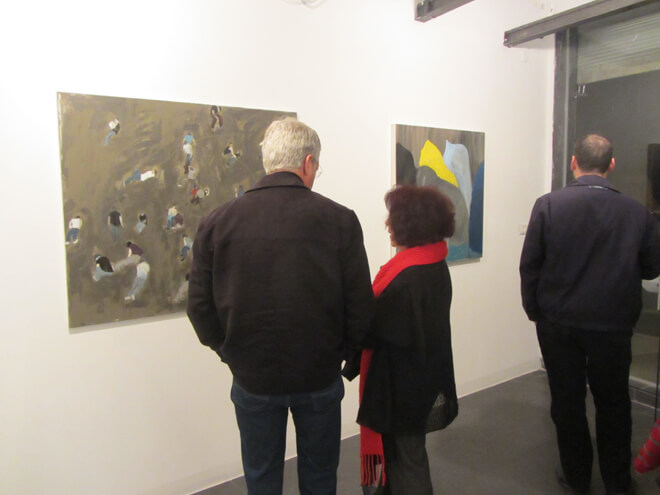 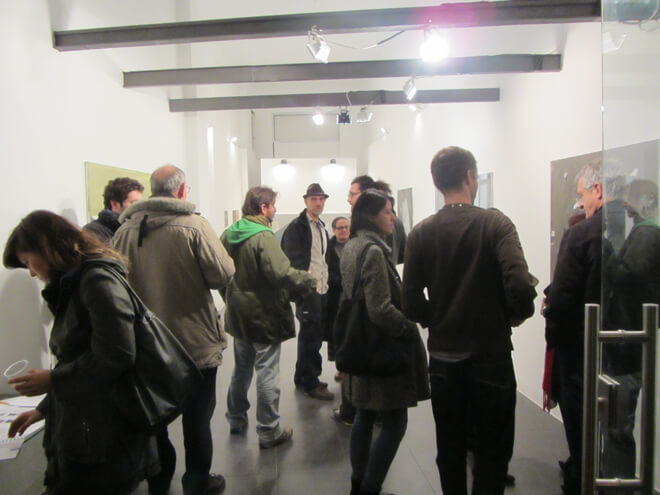 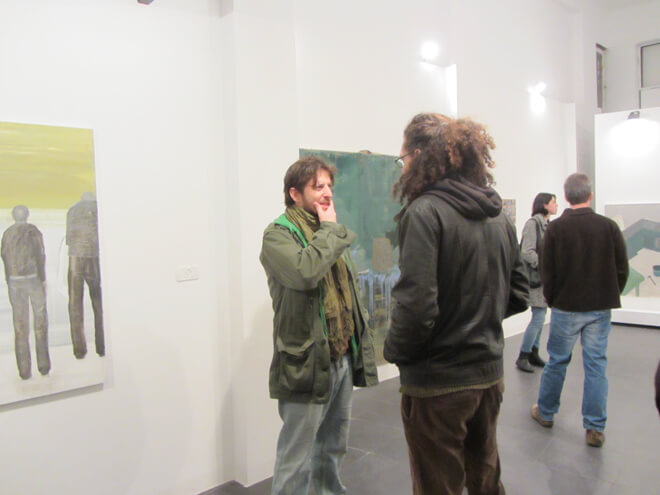 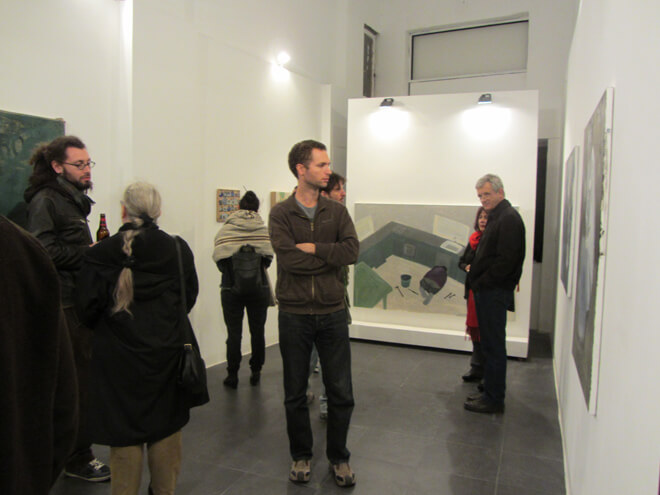 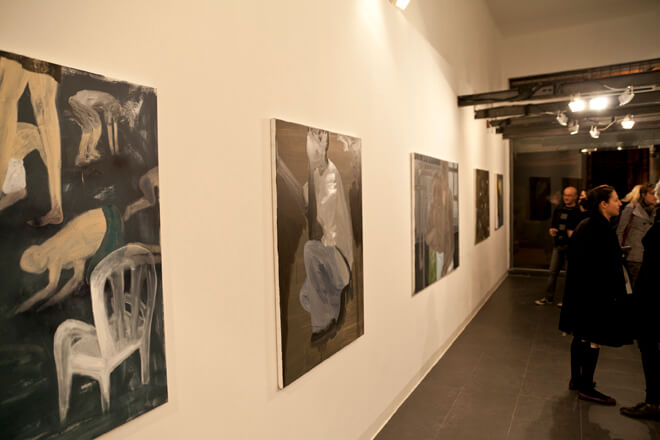 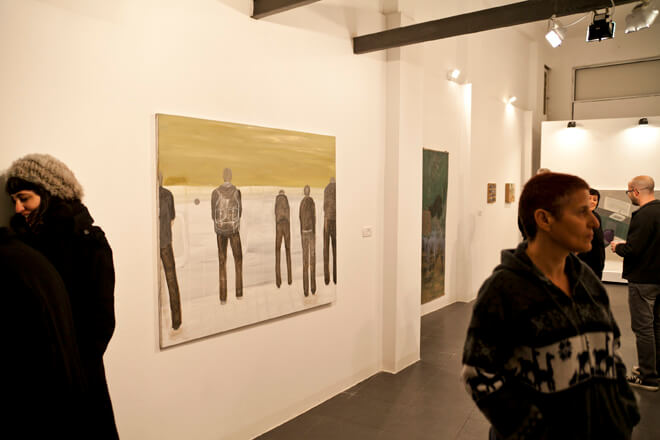 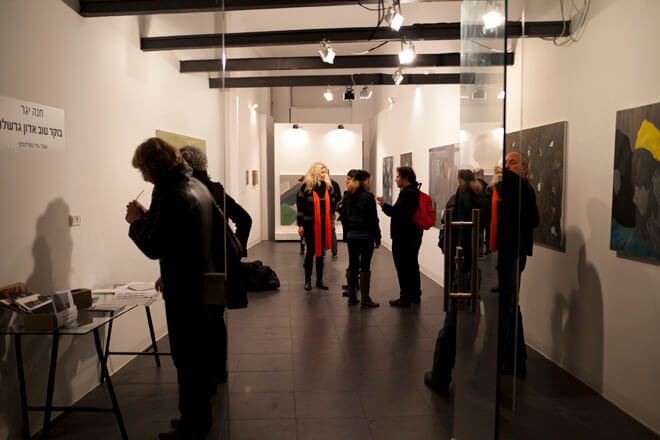 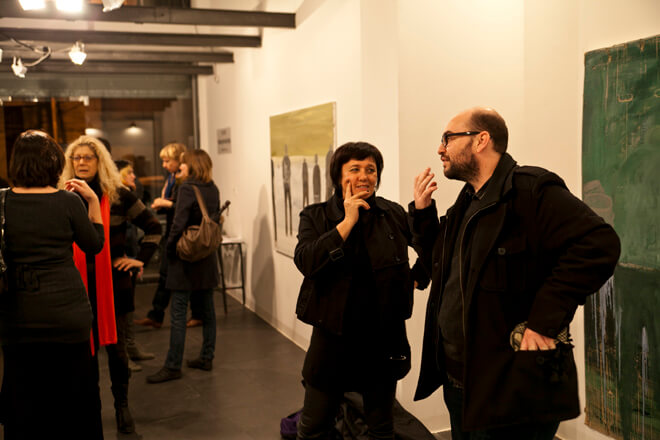 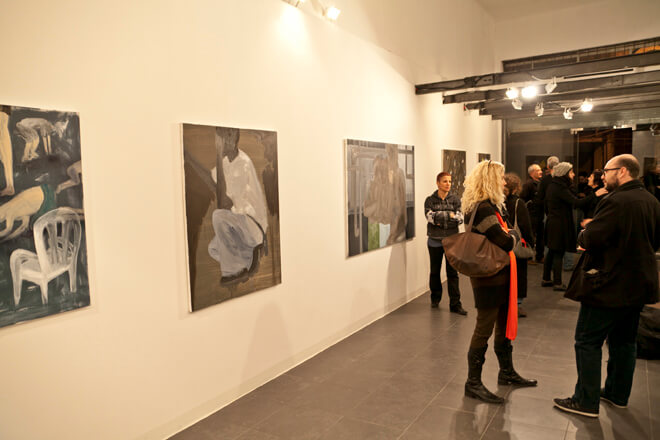 "It sounds funny – 'Mr. Greschler – that's how most people address you in their letters. I read the letters you received after you left Czechoslovakia and came here. It seems there aren't any people you are really close to.

I woke up earlier than usual this morning. After reading the letters I found myself painting the same vulnerable and injured people again and again where, unconsciously, each and every one of them has something of you in them, of your personality, of your injury, of my injury…"

'Mr. Greschler' is a painterly inner codeword, an idiomatic autobiography that appears and reverberates in the paintings of Hana Jaeger. The artist peeps at a march past of men who, by virtue of her gaze, become one and all a 'Mr. Greschler', a faceless masculine personality that never looks back at you – a black male migrant worker, soccer players in a dressing room, or a single person in a crowd in a street. The figures in the works of Jaeger are each enclosed within their own world as though unaware of their inherent place within the portrayed scene.

The act of painting absorbs the parade into a tired, spotted, painterly expanse which emphasizes the attitudes of the stooping body over the drama of the facial expression. Gestures of color, intermixed in a chromatic scale of half and quarter hues, create an illusory and occasionally threatening screen spread gently across the canvas.

With subtle hints and delicate brushstrokes the artist invites the viewer to decipher the melancholy notes of discord that make up the world of 'Mr. Greschler'.

"…And the day before yesterday, too, I saw everything…I stood on the sidelines and did nothing. I'm sorry. Could I have done anything? I feel no anger, Father dear, only a great deal of pity and pain.
I'm ashamed and want this to end.
Your yearning and loving
daughter,
Hana"

The subjects Jaeger treats are connected to the stories of everyday people, marginal figures.

She documents in her look and paintings the moments that unconsciously pass us by.

They are moments devoid of splendor that only the sensitive eye and heart can ever perceive, be captivated by their magic, and even be troubled by them.

Jaeger contemplates, peeping at those she is interested in. Some of them are bent low, portrayed in a moment of weakness, lacking any heroism, immersed in the daily banalities of washing, searching, demonstrating and struggling.

Even when she depicts them in action, they appear passive and defeated.

She portrays these selfsame figures as ones that have been trapped in unwanted situations which they are unable to control and have come to by no fault of their own, and also mostly failing in their struggle against a merciless random fate.

They are like Hirshl, the protagonist of Agnon's A Simple Story,[1] a feeble passive figure who accepts his fate, is unable to act accordingto society's dictates, and is unaware of his right to self-fulfillment, which leads to his loss of sanity.

Jaeger's heroes pay no heed to the fact that she is watching them; are they even aware of her presence? And even if they are, her presence does not penetrate their world.

She peeps into the intimate, documents its contents, and she alone succeeds in seeing what is occurring.

She conceals their faces and her figures, eyeless, do not look forward. They are submissive, self-centered, engaged in the troubles and activities of the daily routine, a routine that affords them no consolation.

The physician who treats Hirshl teaches him to lead a life of "dormant" desires, to accept that life's routine is unchangeable and not to be resisted.

However, he who gives up the struggle but nevertheless chooses not to forgo his freedom is doomed to loneliness, sadness, and misery.

Jaeger's starting point is the abstract, the areas of color, and from within the abstract and spot of color there flickers a scene, an image, or a subject. She continues, creates the delineating lines, tightens and particularizes the meetings of areas of color, proceeding until she has completed the work.

By means of abstract expressive spots of color she manifests an intensely painful realism.

She flattens the painting leaving no perspective, or observes from an angle that creates a distorted perspective, brings her figures to the forefront of the stage, and does not allow the viewers to keep their distance from her work.

Are the shadows in her works reflections of the figures or independent separate entities?

It sometimes seems that these are the principal images in the story, the ones who exist in the shadows, the ones we do not see.

For a shadow to be created one needs light, light which is absent in her paintings, which moves both the shadow and us from place to place, without which there is no life.

Jaeger exposes for all to see the personal and the intimate, the figures which she paints as well as her own self; she gives no names, leaving it for herself to tell her own story and for us our own. Not one of them is a simple story.