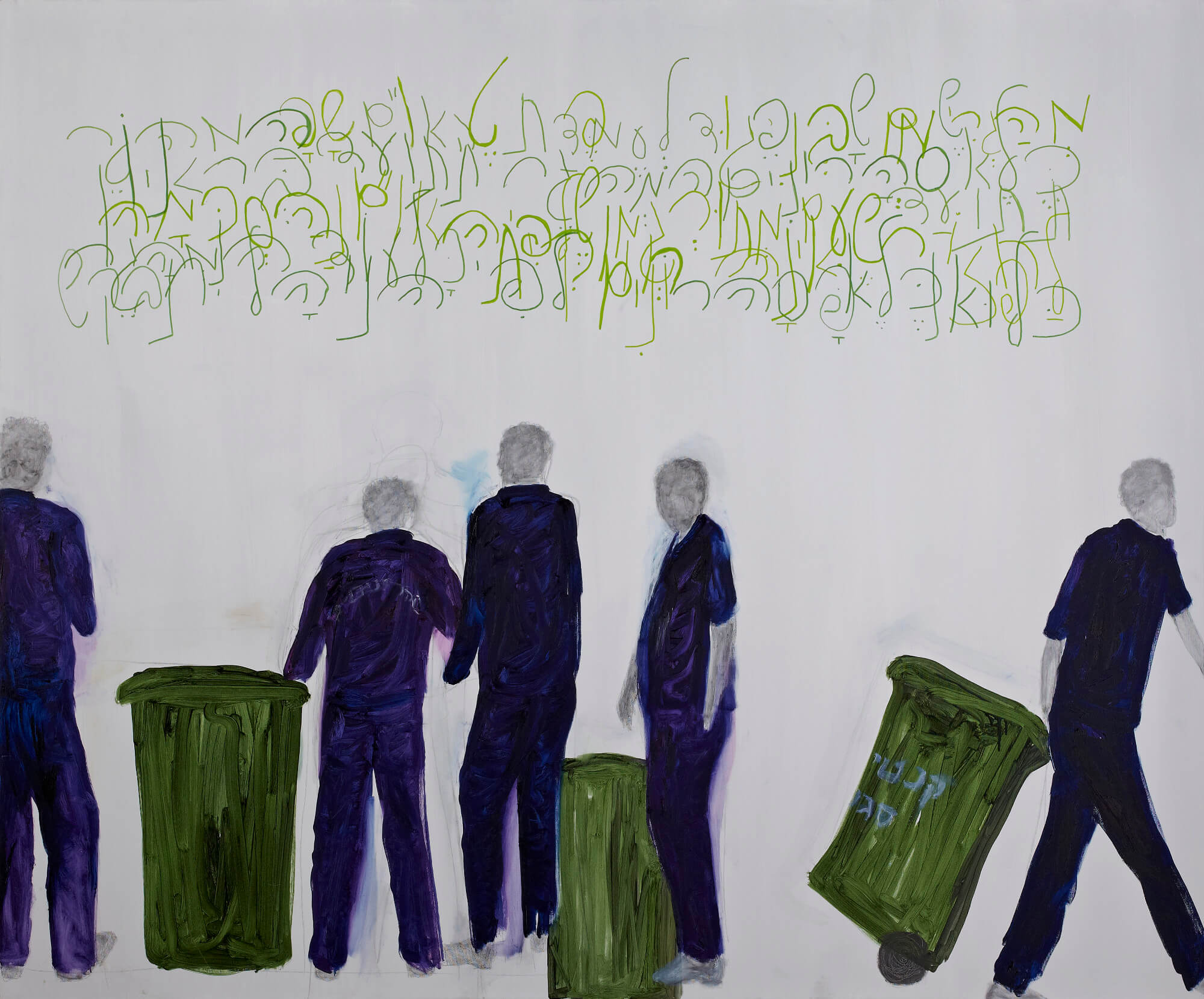 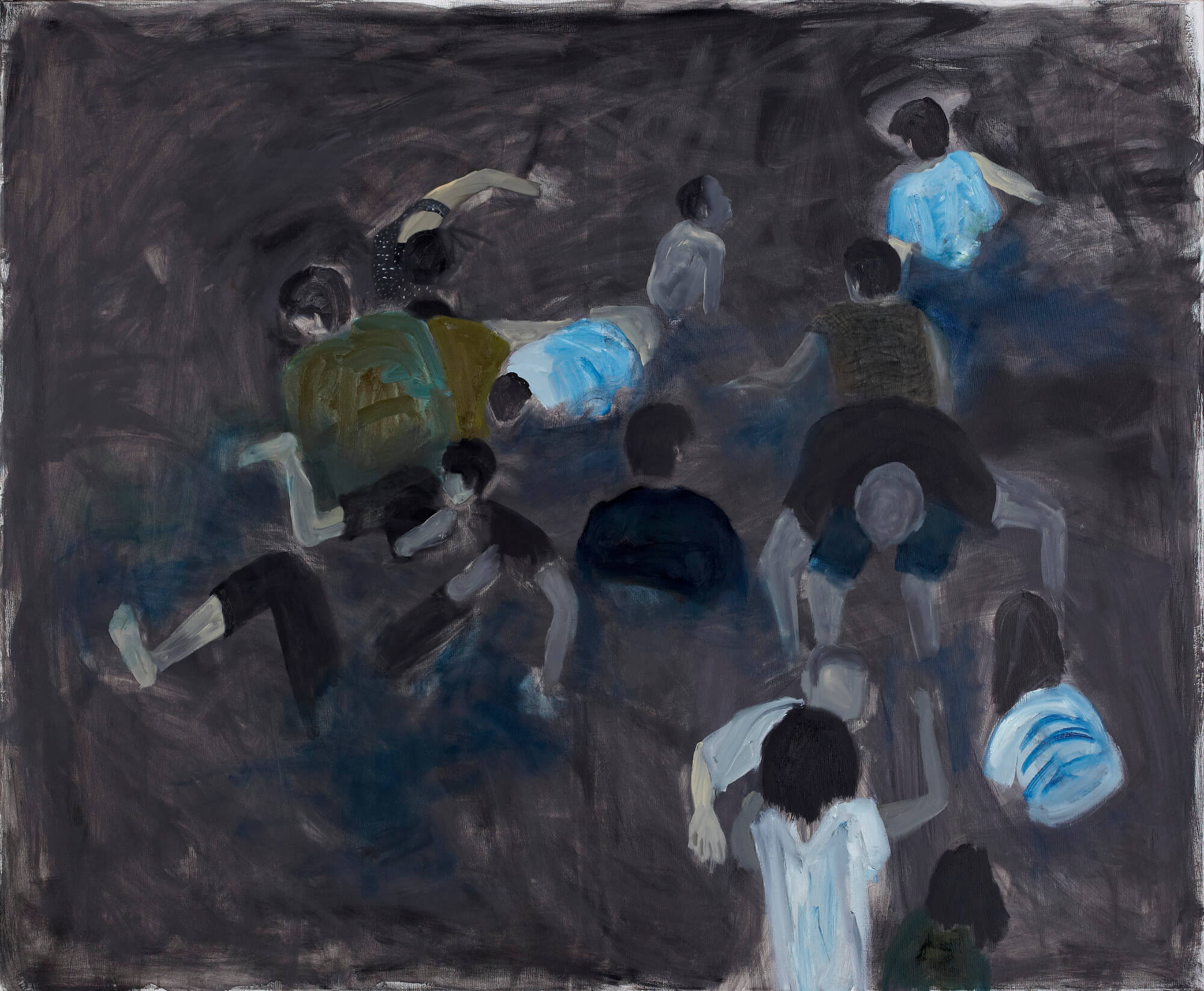 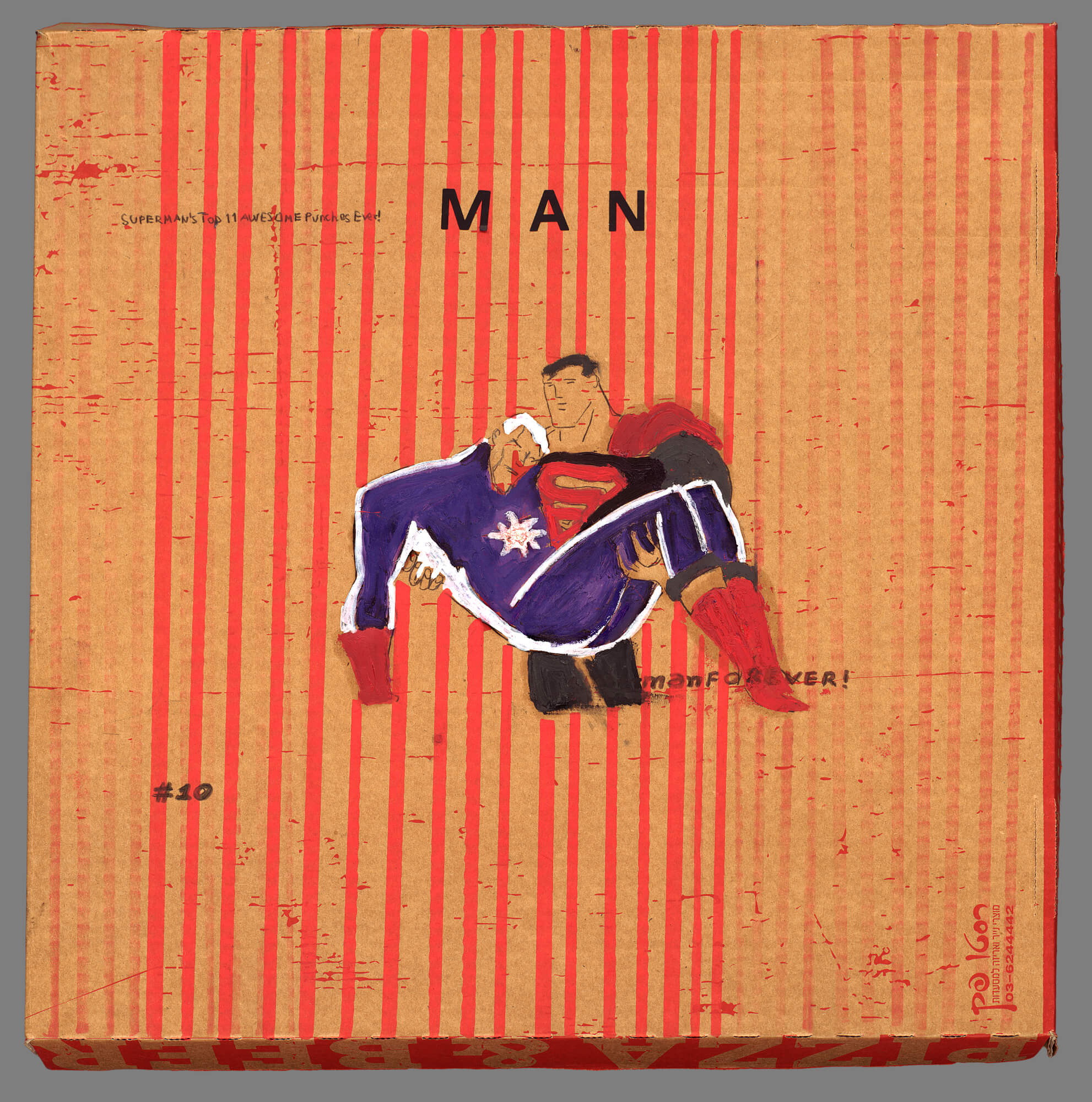 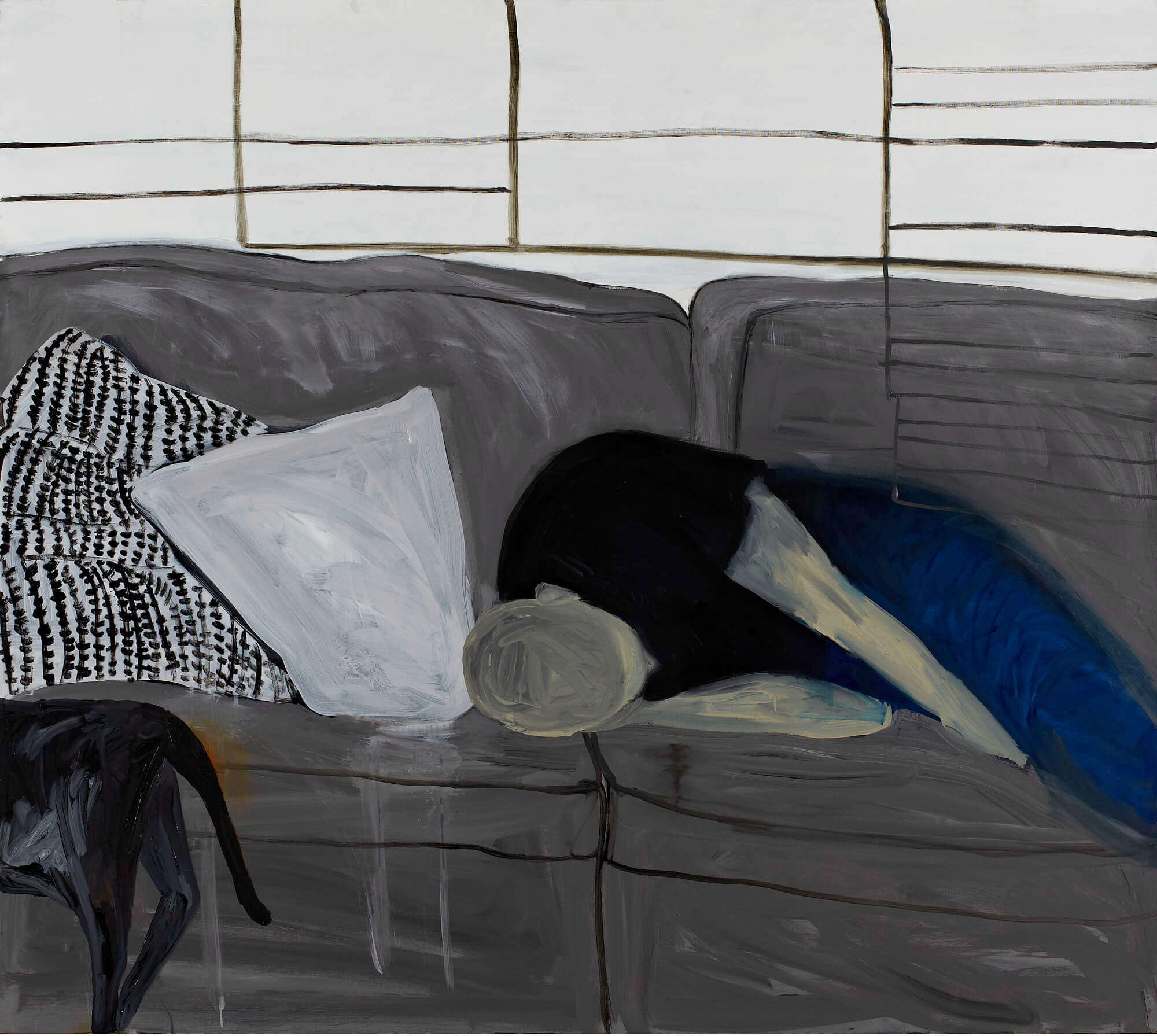 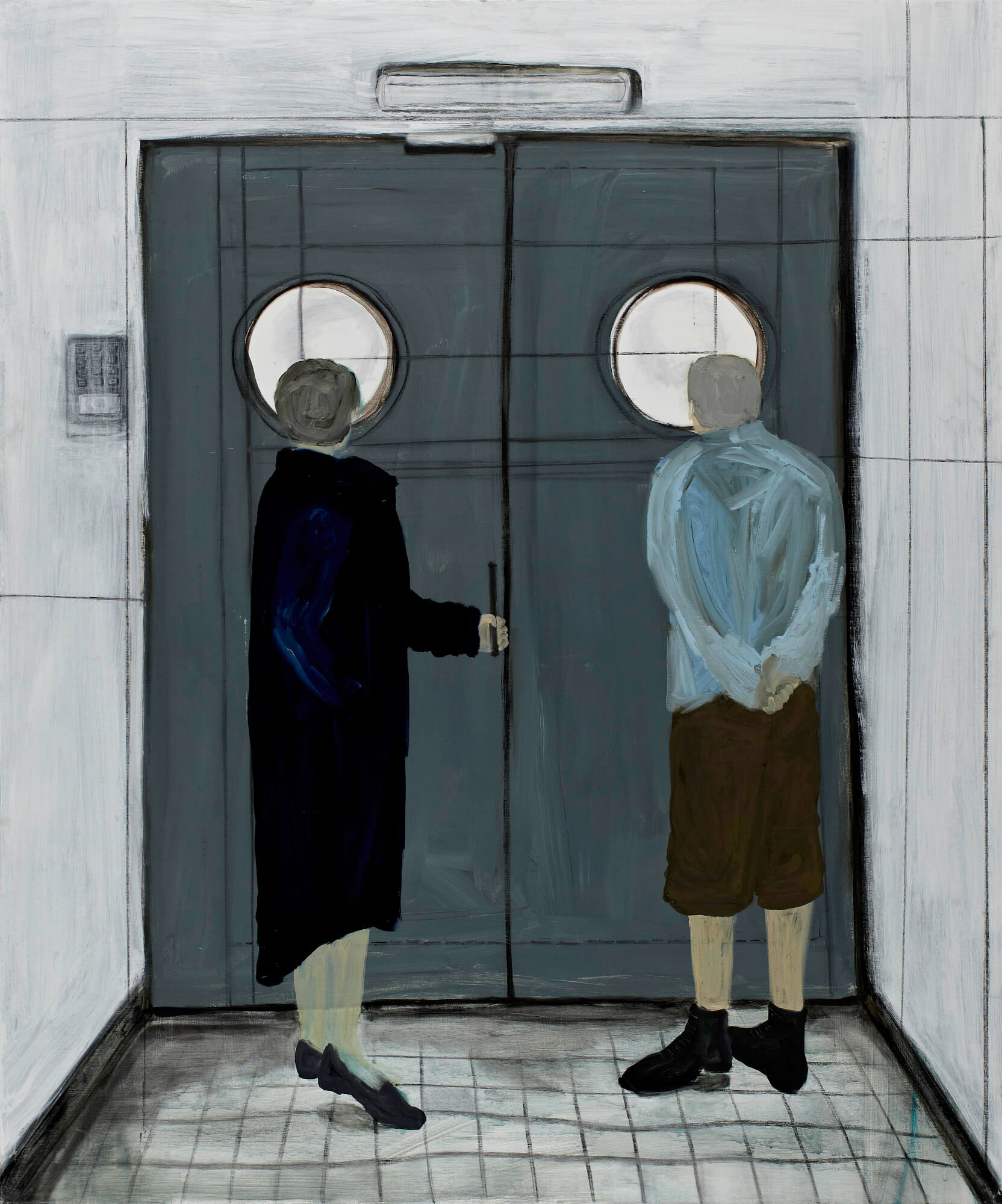 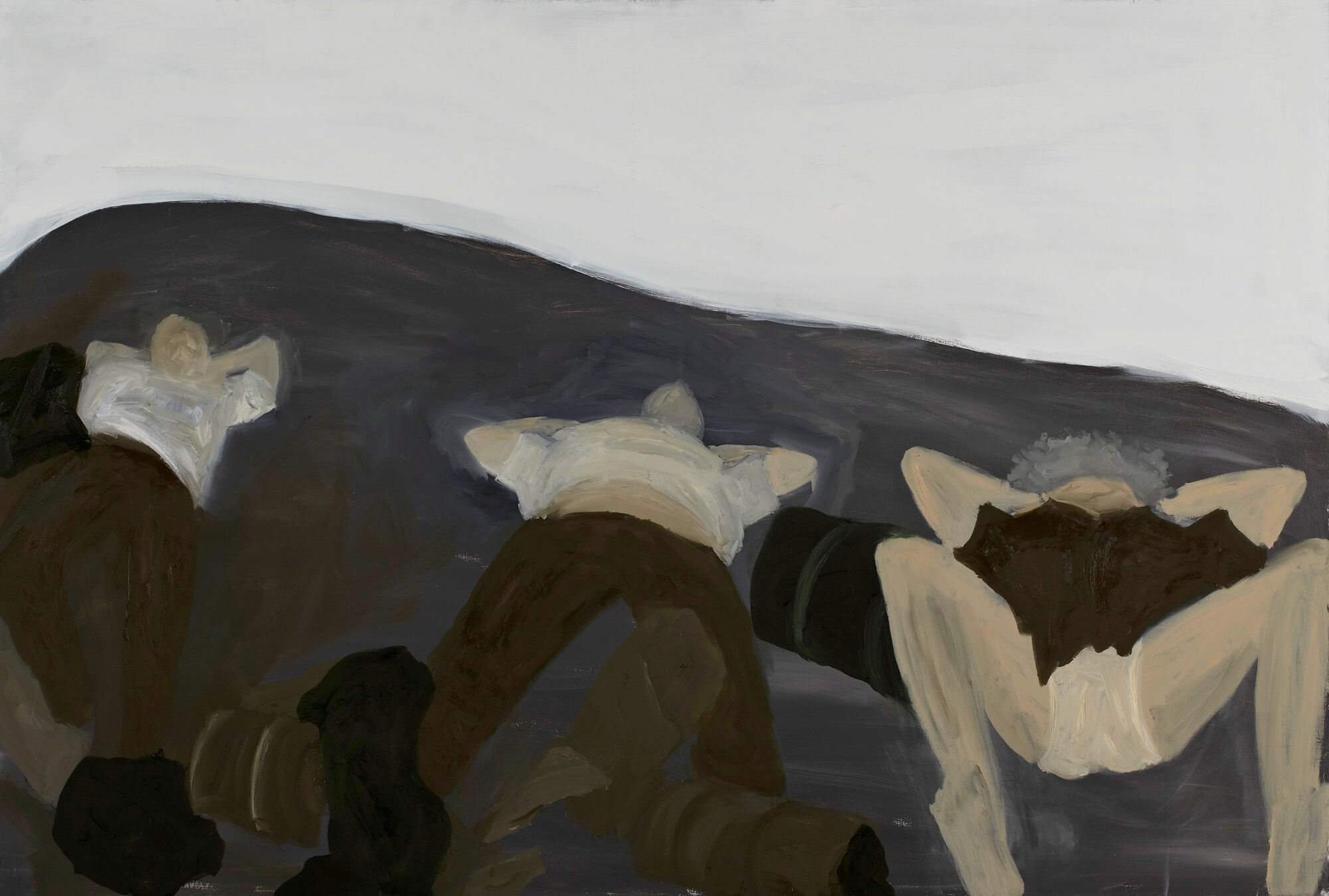 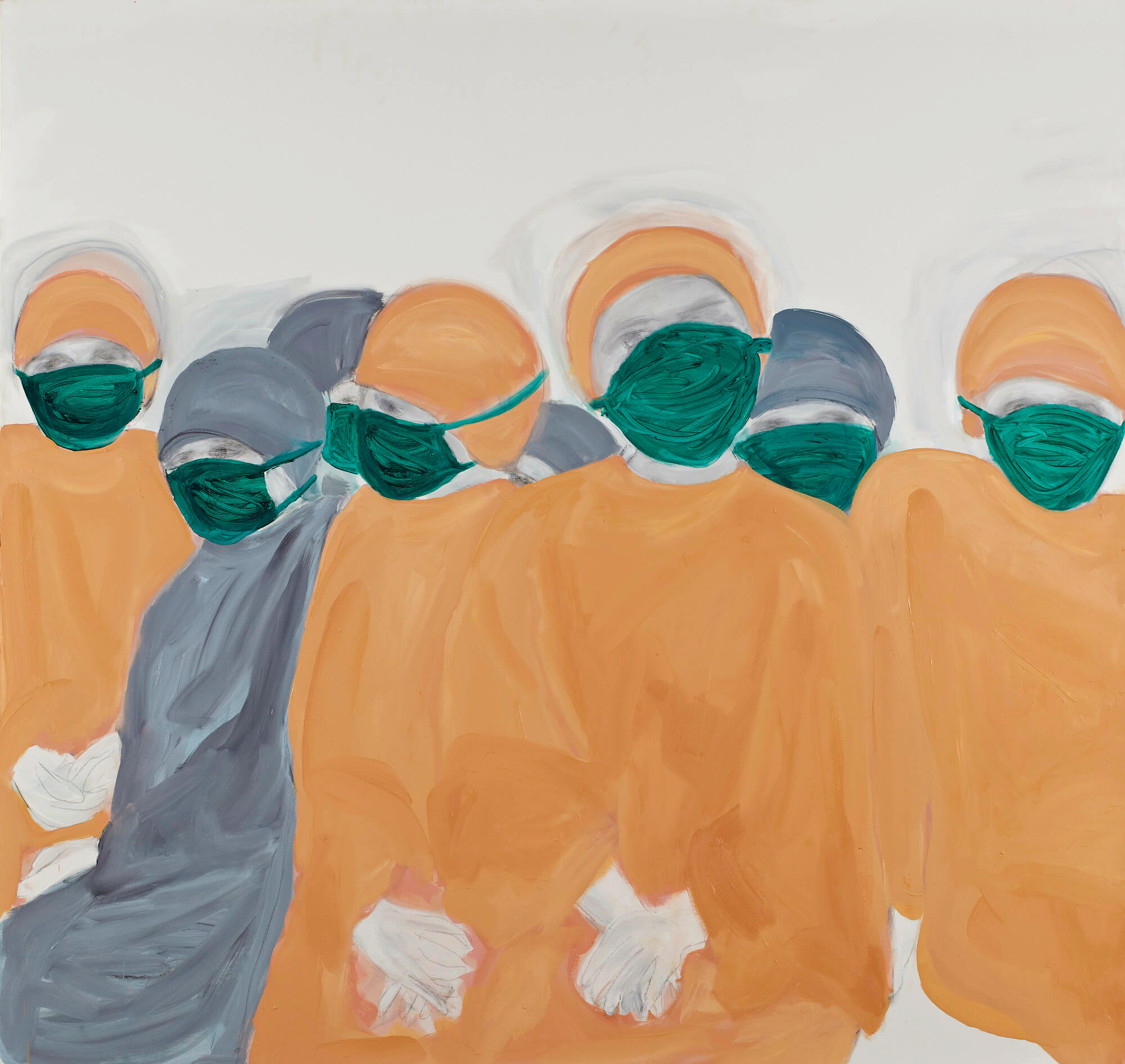 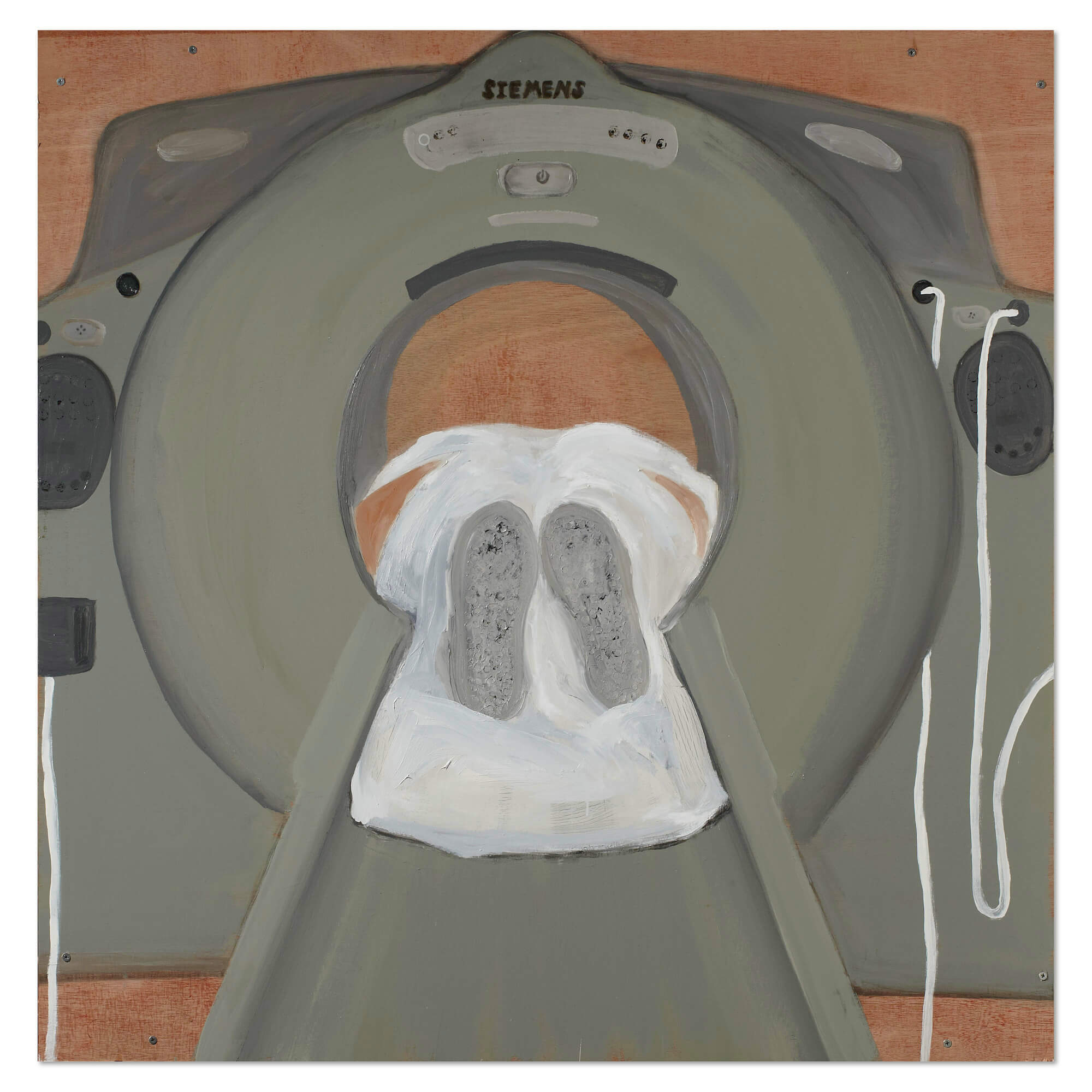 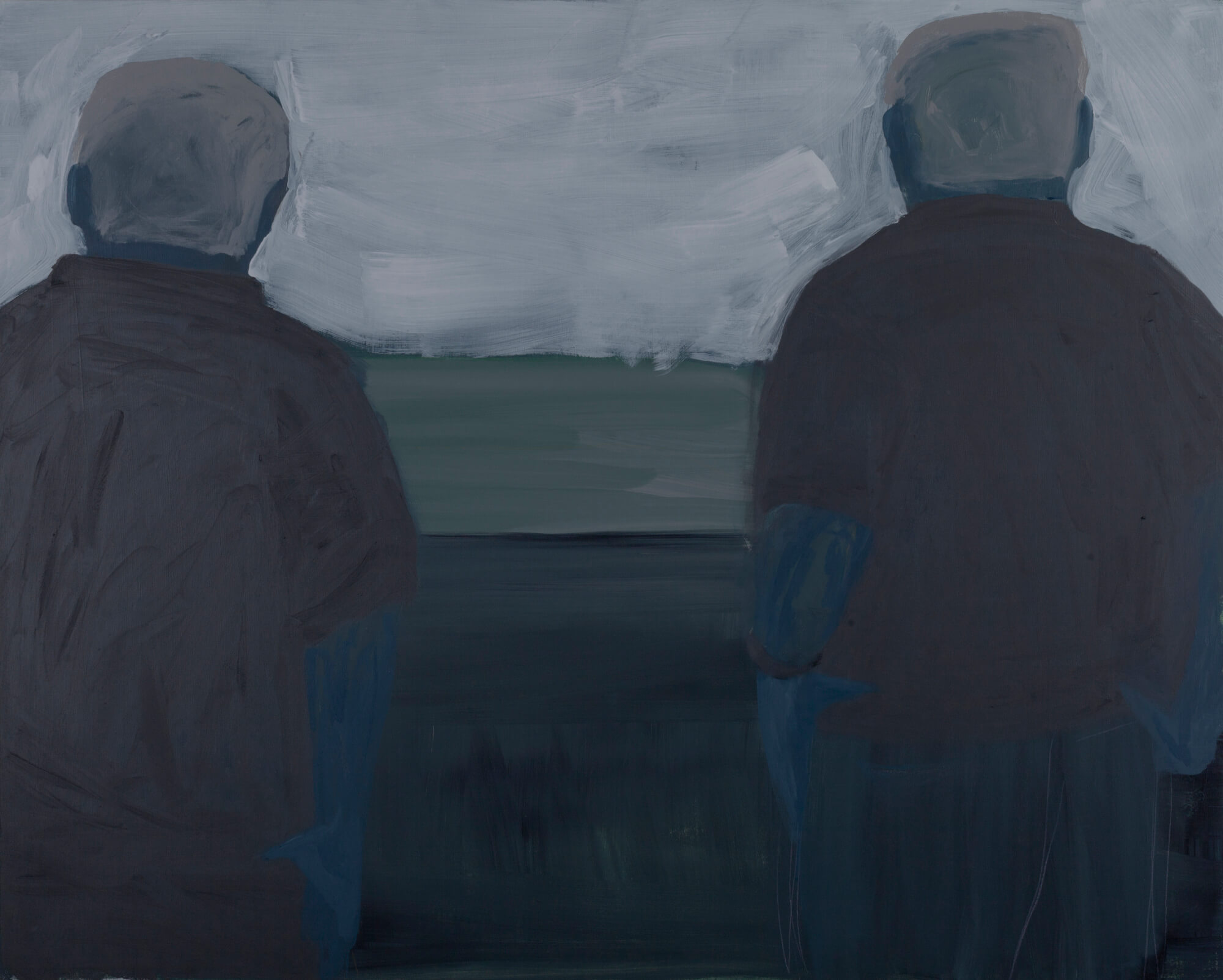 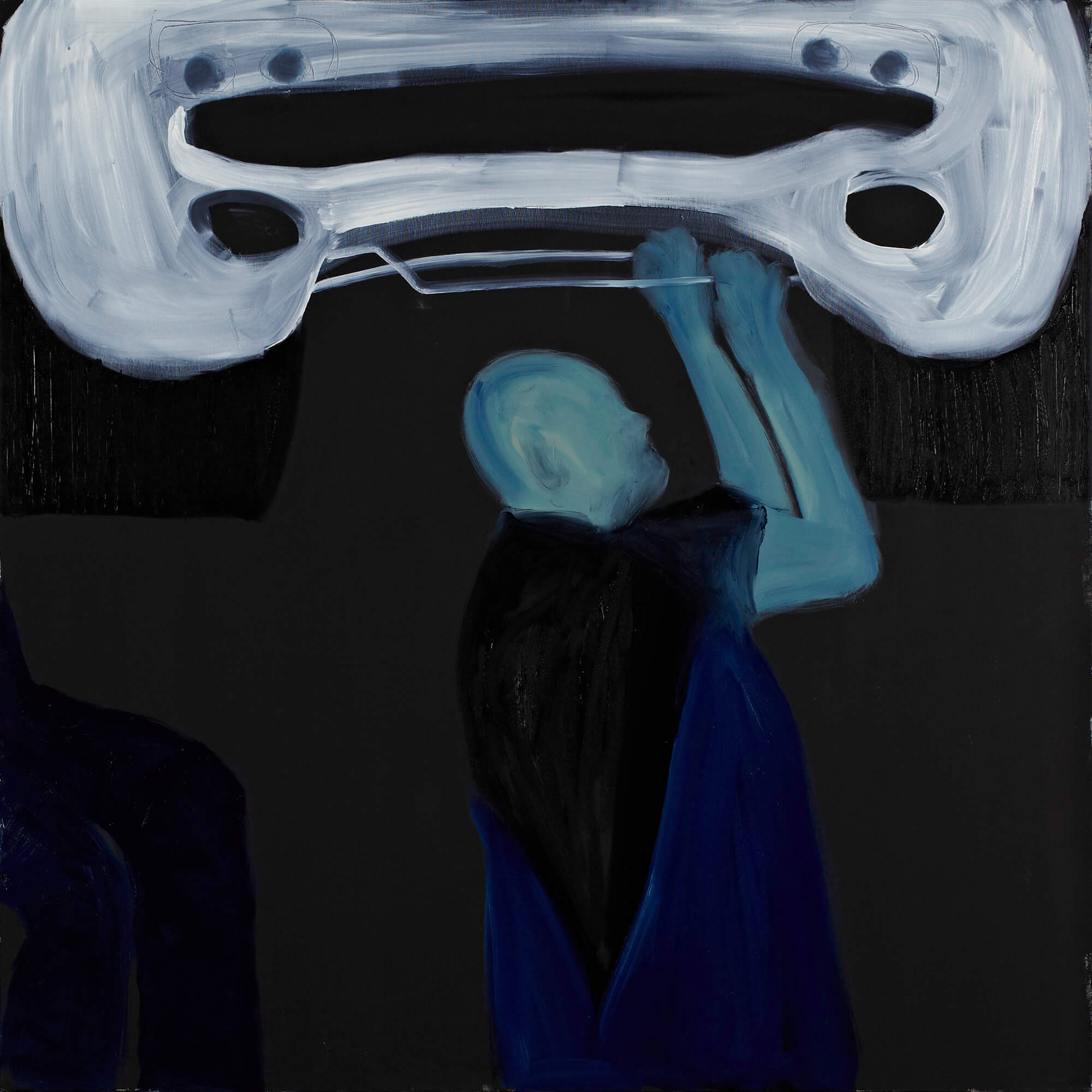 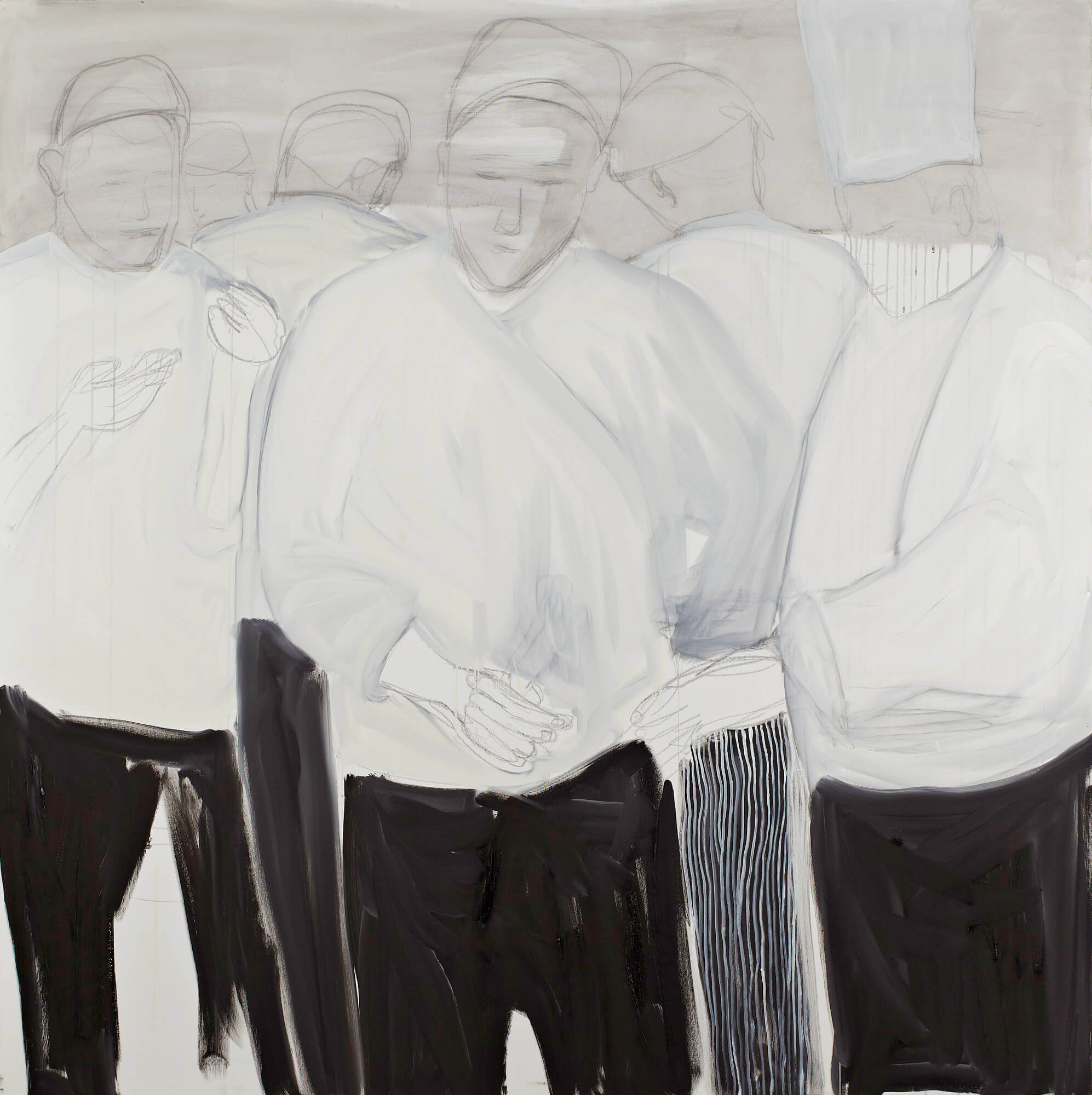 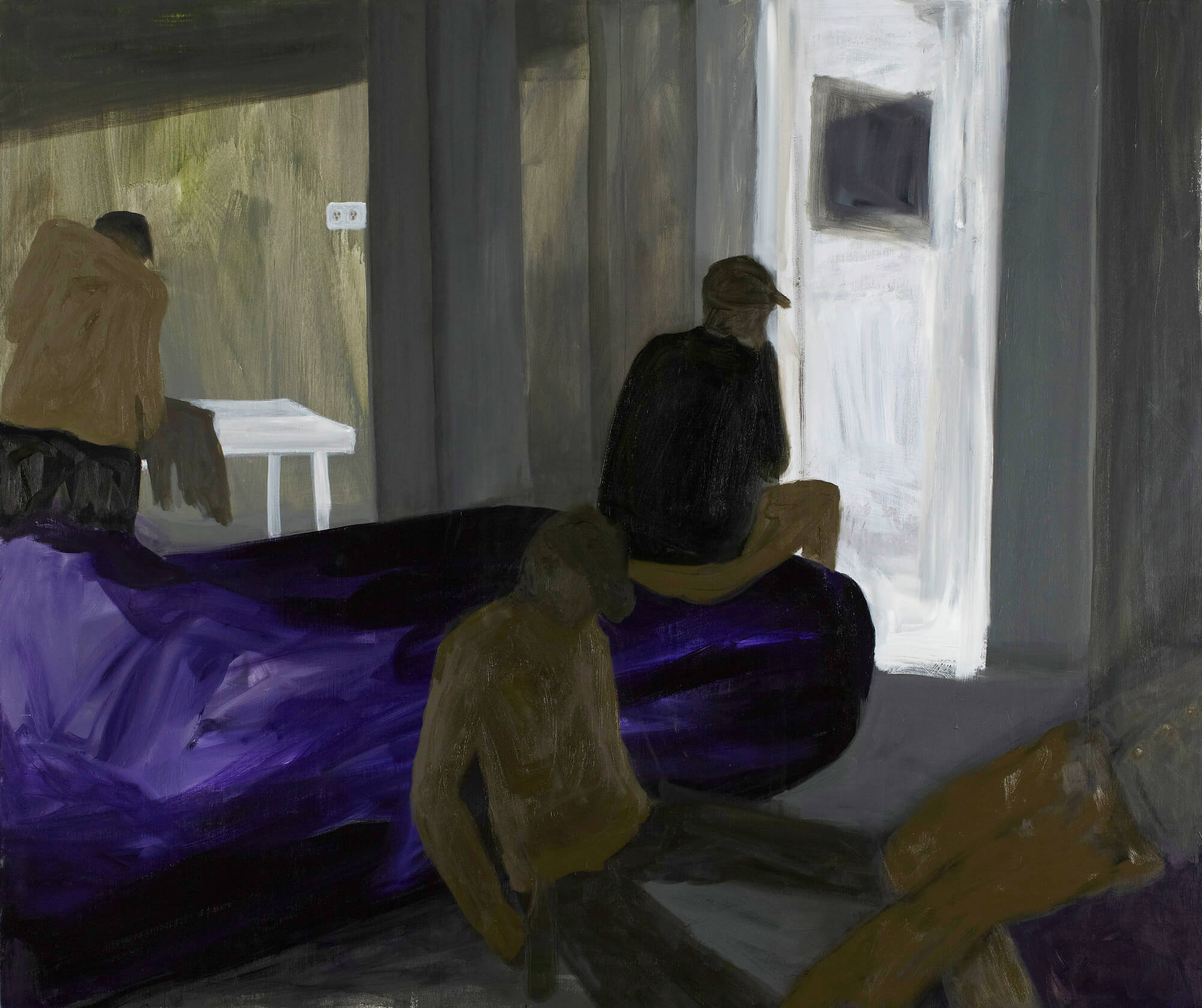 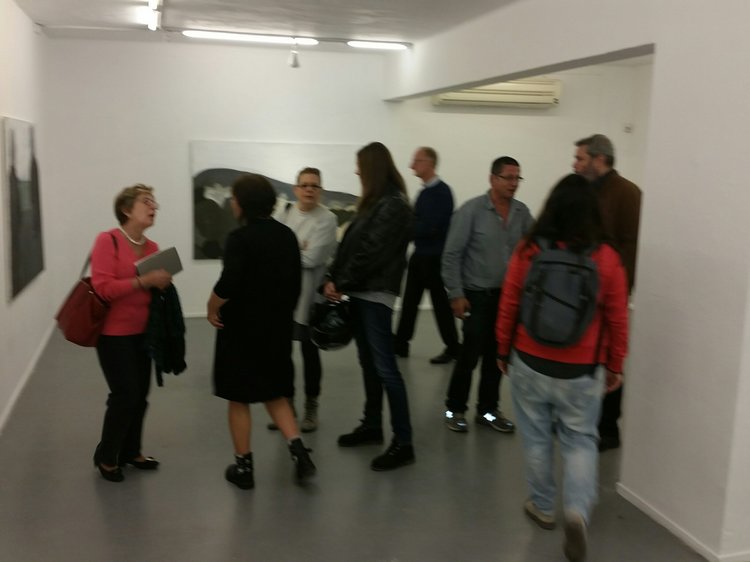 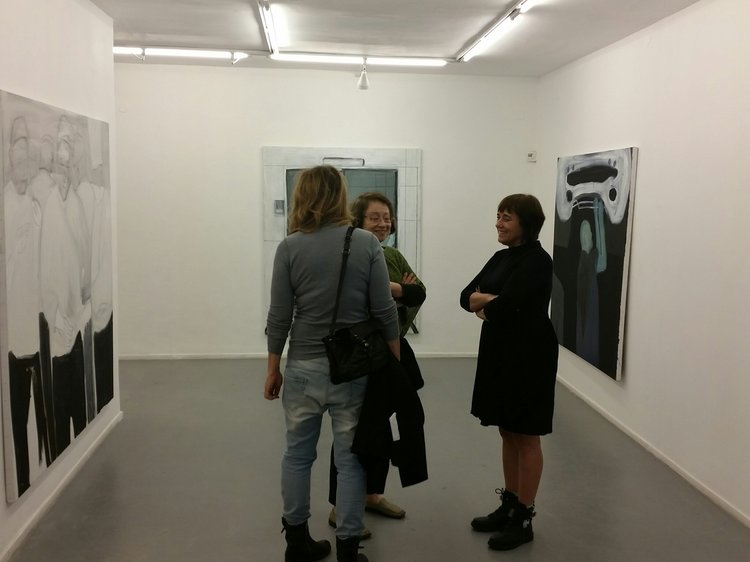 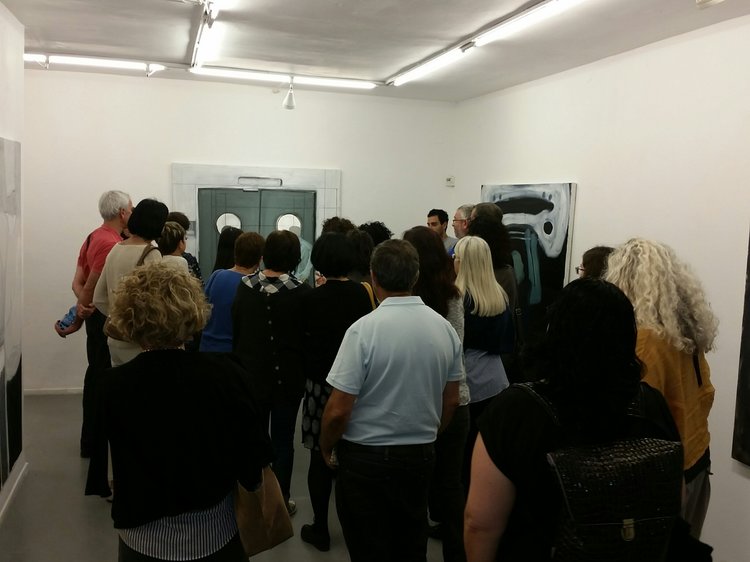 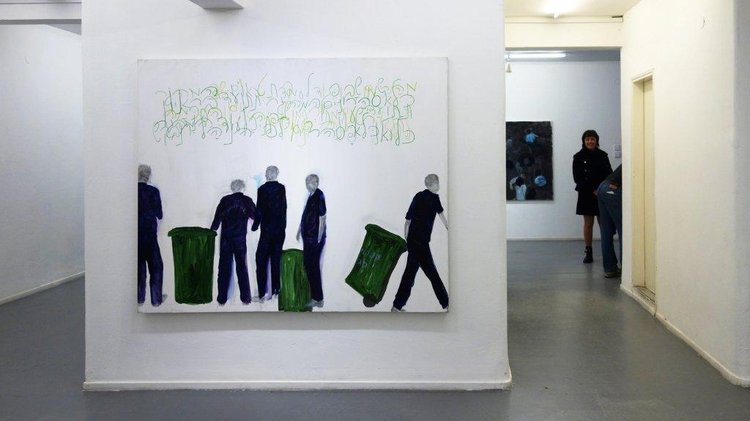 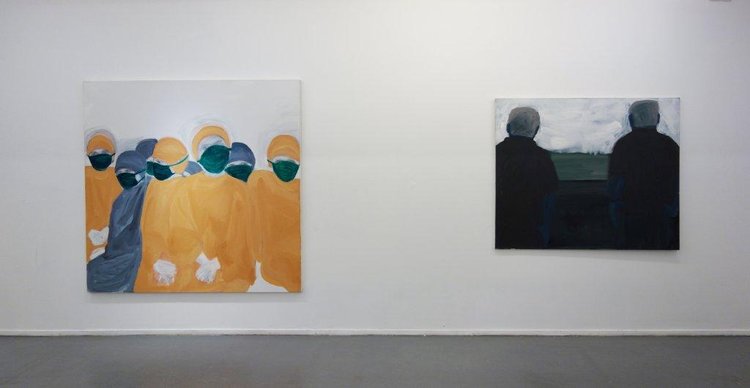 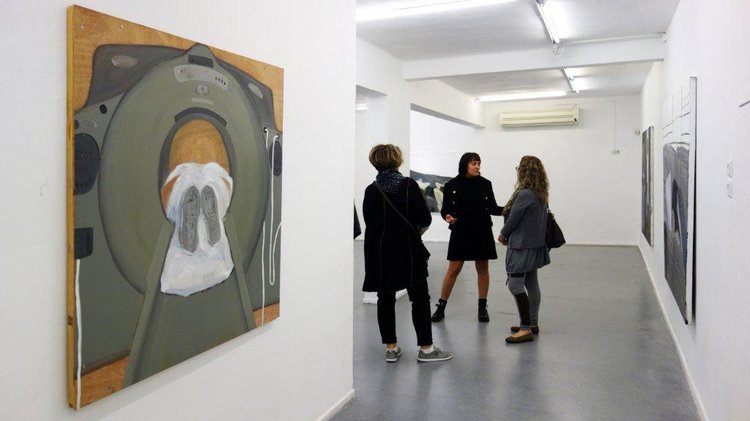 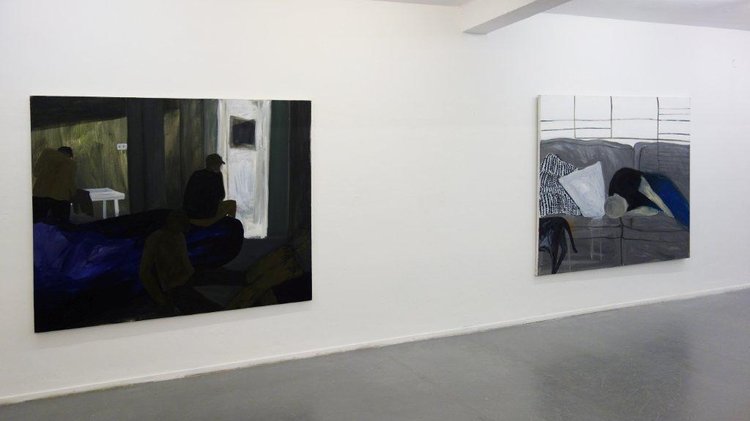 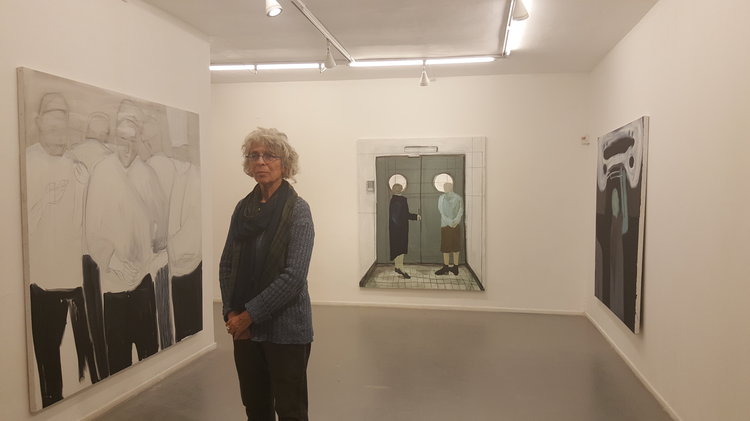 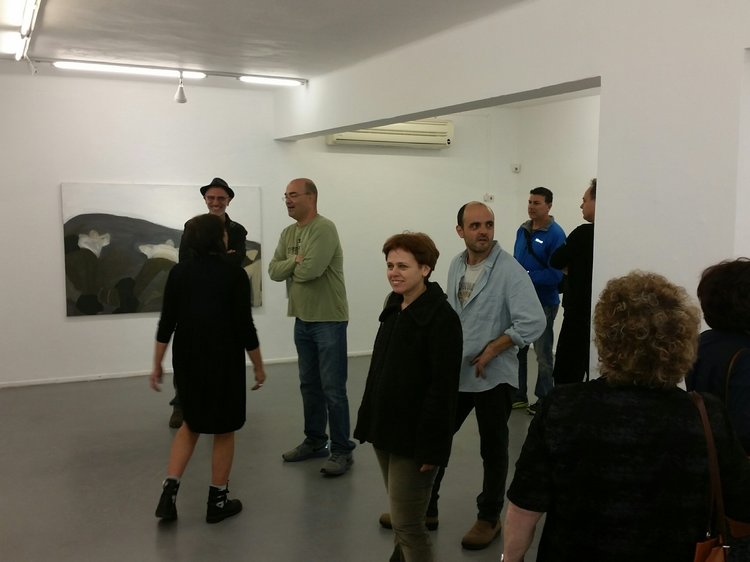 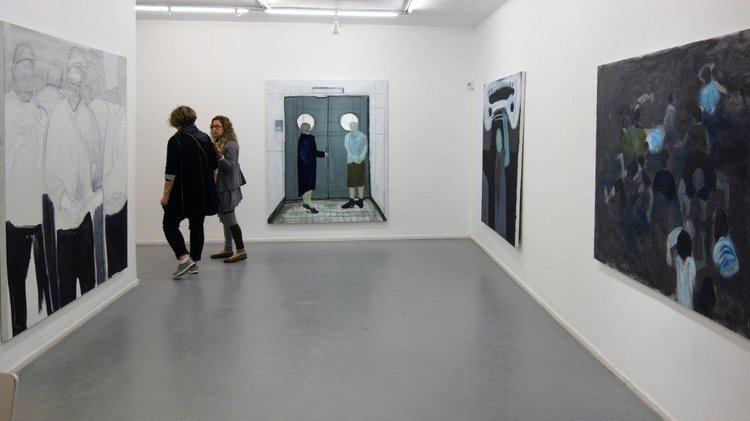 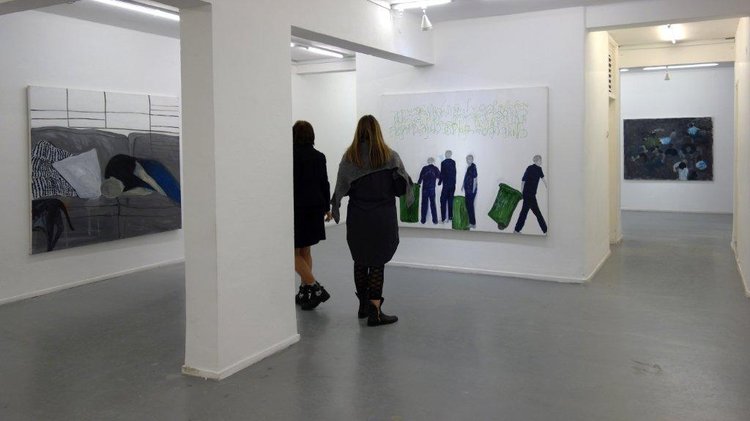 An exhibition is a one-time world and as such it absorbs the specific characteristics of the place to its advantage. Thus you descend to the gallery by steps. A basement. The descent is enhanced when, opposite the entrance, at a distance, figures appear sprawling on the ground, facing the seemingly infinite expanse above them. To the right the entrance space opens toward two bright round lights. The two figures, portrayed from the rear, are looking out of the room, straining to benefit from this brightness by raising themselves on their fingertips. For a moment the light's whiteness appears to bathe them in sacred halos and they seem about to ascend to the heavenly worlds.

In the first work displayed in the entrance space the descent enhances the view from above –  sinking toward a dismal expanse devouring any semblance of order, sometimes spinning and swallowing a lower body part and other times retaining a headless figure with its legs raised aloft. In the nearby work appears a figure in close-up – and in what for a moment looks like a truck can be seen a kind of white, private, lifesaving board to which the figure is clinging.

Hana Jaeger always starts out from a realistic photograph of a concrete event such as: a group of soldiers having an afternoon rest, a flood, a photograph of the Indian surrogate mothers who were caught in the natural disaster in Nepal. The photograph is for her the starting point from which to create a living space where the figures are faceless and anonymous. The bakers at work placed opposite the entrance and the orange women at work in the inner area are the only ones looking toward the center of the space and facing the spectator, but with merely a blank look on their faces. Each group appears like a conglomeration, almost like a kind of amorphous body, which is another way for Jaeger to express their anonymity.

Horizontal brush strokes dispel any possible claim to identity in the bakers' faces. The minimal drafting line delineates only facial features and eyes. Arms, as possible active limbs in the world, are granted extra lines that attempt to be true but betray faults (that are not disclaimed) as if how and what is required to enable the ability to act – in a manner that expresses personal identity and will – has already been forgotten.

Many of the figures are not descriptive but strangely enough they are very specific though rather emotionless. Even when they are in a room portrayed in detail – they themselves are passed over. They do not belong to their particular environment but rather to some internal expanse from which we are barred. The figures with their expressionless look operate the uncharacterized expanses silently and differently on each occasion and always away and distant from the viewer.

The white paint in the exhibition fulfils diverse tasks: sometimes it's a world, an infinite expanse or end. Sometimes thick and opaque. Sometimes lit up like a space of salvation. Sometimes it is cold and undefined (like in the case of the bins people). The figures, even when wearing workers clothes, nevertheless remain uncharacterized – merely people in the world, the cosmos, nowhere.

At the exit we are again confronted with the farrago of figures and in the work to the left one can even imagine a deus ex machine for the contemporary situation.